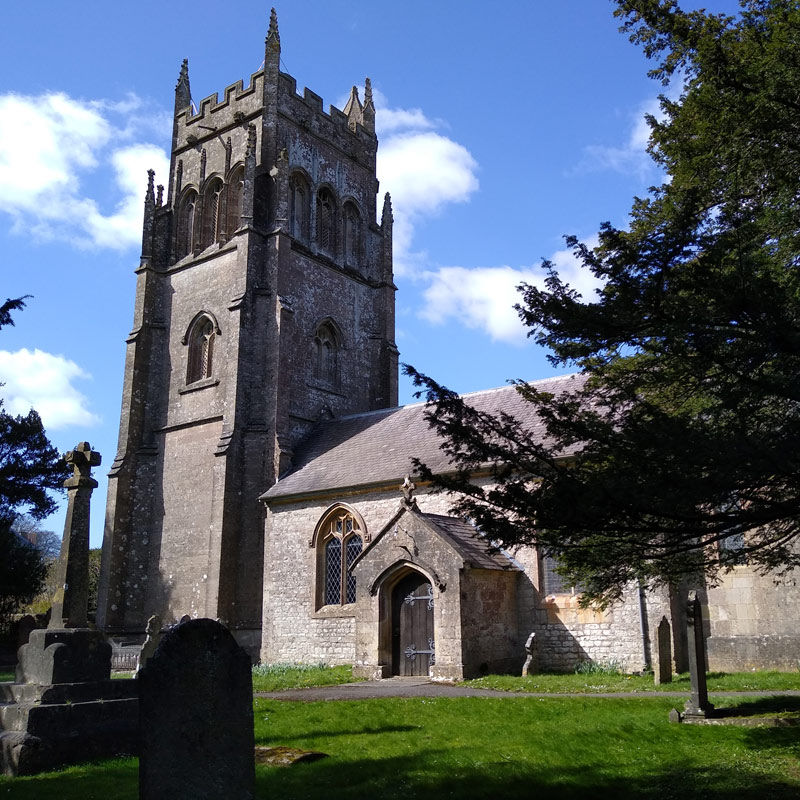 It is in the Diocese of Bath and Wells in Somerset, and is in the Benefice of Shepton Mallet with Doulting. It is kept open during daylight hours so it’s opening and closing times move with the seasons.

It is a beautiful church with outstanding stain glass windows, and a good heating system for winter services.

It has three services a month starting at 9.30am. The first Sunday in the month is a Family service. The second Sunday is Holy Communion and the third Sunday is a Morning worship. We have no service on the fourth Sunday but hold a united Benefice service on fifth Sunday on a rota basis with Doulting and Shepton Mallet. We have special services for Harvest, Easter and Christmas Day with additional Carol services during December. On the first Wednesday of the month we hold an Evening prayer at 3pm in the church.

We hold “Lunch at Barts” a lunch held in the church on the fourth Wednesday of the month. We do not charge for the lunch but leave a basket out for those that wish to make a donation. We have raised over £2000 from the lunch that is being put towards our installing water, a kitchen and toilet.

We have a wonderful team of flower ladies and a dedicated team that clean the church. Both groups would be keen to hear from anyone that would like to offer their help.

Our bells are rung for most services and on special occasions but we are always looking to increase our number of ringers to keep our bells ringing. A practice is held on alternative Thursday evenings at 7.30pm.

In 2010 there was a reordering of the church bringing it in line with the Disability Act of 1995. As part of this reordering the front group of pews were removed to make way for a new Nave Communion table and two prie-dieux and priest chairs. A partly glassed inner south porch door was installed, inside the main church entrance, made and designed to match the tower screen.

The duties of Churchwarden are currently being undertaken by a group of volunteer helpers. Though this arrangement is working very well, there is a vacancy for two Churchwardens, so please make yourself known if you would like this highly regarded position of responsibility!

Notes are available to Electoral Roll members. Currently, a new Lay Chairman, and one or two Churchwardens are required. If you know of anyone who is interested please ask them to contact the Benefice Office 01749 342163.

These are pinned up in the church porch. Do speak to someone if you think you could help!

Cranmore – or rather Crane Mere, the Lake of the Cranes – first comes to our notice about the time of Bishop Jocelyn in the 12th century. For some reason, probably to do with tithes and their collection, the parish was divided into East and West, it having previously been only one village. Any churches or chapels of that period are certainly not those of today.

As regards West Cranmore Church dedicated to St Bartholomew, you can see at a glance that its style of architecture is perpendicular Gothic, which dates its construction towards the end of the 15th Century. Some windows, for example, are quite sharply pointed, not more rounded as in the early English period which followed the Norman. The crenellated tower and ornamental pinnacles, not strictly functional, also help us to fix this date, although happily it remains basically a simple country parish church, which is all it ever aspired to being, and which is the way we hope people will continue to look on it today. The Ministry of Environment list of historic buildings describes the church as ‘14th/15th Century – Perpendicular nave, north aisle, chancel, south porch, west Tower (good perpendicular tower of 3 stages, angle buttresses with pinnacles up 2 lower stages, embattled parapet with sprelet. Other window pointed arch perpendicular except square headed to North aisle. Cross (in Chuchyard 14th/15th Century. Restored shaft and head in square socket on base of two square steps’.

During the Middle Ages the power and wealth of the Church grew immensely – far too much, some would say. Nevertheless it was very much an age of faith, unlike our own, and it was this faith which invented and saw the growth and fine flowering of Gothic architecture. This style has been described by the writer G.K.Chesterton as ’infinity made imaginable’, and we can see what he means. Our older parish churches and cathedrals do give us a strange sense of God’s mystery and beauty, in a way which somehow more modern church buildings find it hard to convey, but of course the materials and craftsmanship available today have altered enormously, as indeed has the whole sociological structure and environment in which we live.

It seems certain that from early times Cranmore came under the authority of Doulting, which was itself under the patronage of Glastonbury. Thus the Somerset Record Society of mediaeval wills gave no hint of benefactions towards the building of the church, which is not surprising, since it would have been financed through Doulting. But if, in the Ecclesiastical hierarchy, Cranmore was thought of in subordinate terms, as a chapelry of Doulting, it does not follow that the villagers thought anything of the sort. Indeed, rumour has it that on high days and holidays, a kind of football was played with a pig’s head, placed at the kick off midway between the two villages which themselves served as the goals. A certain friendly rivalry still exists between them today.

The 16th century saw the end of the Pope’s domination in England and the breaking up of the great monasteries and abbeys such as Glastonbury. Patronage passed increasingly to great families, in the case of West Cranmore the Strode family, after whom the local hostelry, the Strode Arms is named. But should you require refreshment of body as well as soul, take a look at the open fireplace, obviously mediaeval, and the date 1492 scratched rudely upon the beam.

The Strodes were actively associated with West Cranmore from the 17th century onwards, and many plaques to different members of the family can be seen in the church. The one to Admiral Strode in the Chancel, is particularly fine.  Note also the hatchments under the tower at the West end, which incidentally has some fine fan vaulting. The Strodes were followed by the Spencers, and a very fine memorial to Lieutenant Spencer, killed in action in Italy in 1944, is also to be seen in the Chancel.

The Chancel itself was rebuilt in the 19th century and restored in Early English style. This was a period of great religious upsurge and revival in the Church, which often took the form of church building, although, of course, there were many other ways in which it was expressed, such as foreign mission.

What the Church can provide is something hard to define, but perhaps for the local resident and the visitor the building does help to express something of the inexpressible longing of every human soul for God, as they cast their eyes towards the striking stained glass east window depicting the Crucifixion, and ponder on spiritual spheres beyond space and time.

© 2022 All content and images are the property of Cranmore Parish Council and the Cranmore Community Group unless otherwise indicated.  Reproduction is not permitted without prior consent.

Site designed and built by Lurexlounge